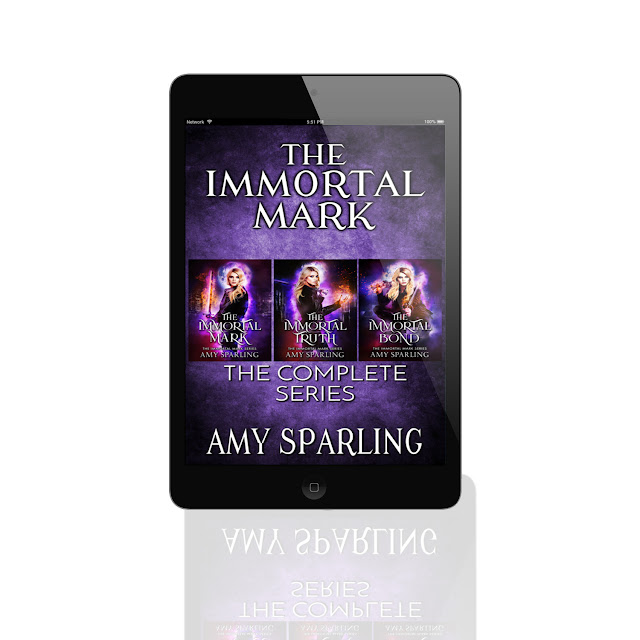 The Immortal Mark box set has a shiny new cover!

This series is leaving Kindle Unlimited on October 24th, and it will be released for sale on all other ebook retailers. So if you haven't read the series yet and you have Kindle Unlimited, make sure you borrow it ASAP so it's on your kindle, then you can read it at your leisure, even if it's after October 24th.

Already read this series? Please click here and leave a quick review for the box set over on Amazon. Most people review the books individually and then the box set doesn't get any review love. Reviews are ALWAYS appreciated and needed because they help an author's visibility on the giant that is Amazon.

Haven't read The Immortal Mark yet? Here's what it's all about:

Book 1: The Immortal MarkThe only thing Cara got for her eighteenth birthday was an unexpected invitation to move out of her uncle’s house. College isn’t an option for a poor girl with average grades, so when her best friend Riley finds them a mysterious job opportunity that includes room and board, Cara is interested but thinks it sounds too good to be true.The night before their interview, Cara has an epic night out with Theo, an impossibly handsome guy she just met. He’s charismatic, a little mysterious, and it feels like she’s known him her whole life.When she runs into him at her interview, he’s cold and elusive. He makes it very clear that he doesn’t want her working with him, which only makes their mutual attraction burn hotter. Cara takes the job for Riley’s sake and promises herself she’ll avoid this jerk and his mood swings, no matter how hard it is to keep away from him.Soon she finds out her millionaire employers aren’t normal guys who live and travel in luxury. They’re immortals. Theo wasn’t trying to ruin her job prospects. He was trying to save her life, because the girls they hire never make it out alive.Book 2: The Immortal TruthCara and Riley know the truth about their new job, but they can’t say a word about it to anyone or they’ll be killed. While their fates hang in the balance, Theo has promised to find a way to help them. Theo has been shielding Cara from the horrible truth, but Cara has just discovered some truths that even he didn’t know. Book 3: The Immortal BondAfter discovering who’s really in charge of the Rosewater Clan, Cara and Theo find themselves in a deadly imprisonment they can’t seem to escape.

Email ThisBlogThis!Share to TwitterShare to FacebookShare to Pinterest
Labels: the immortal mark