Happy Book Birthday to INTO THE DARKEST NIGHT by Cassandra Giovanni! 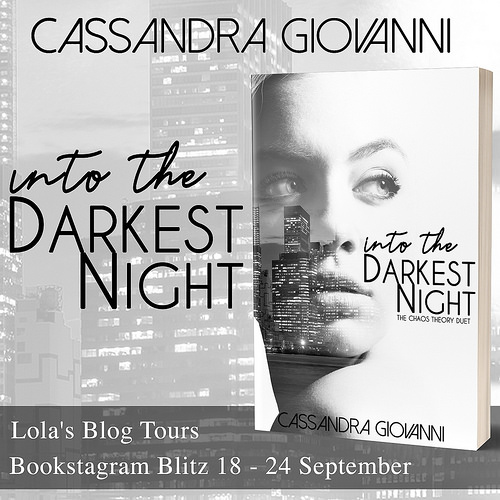 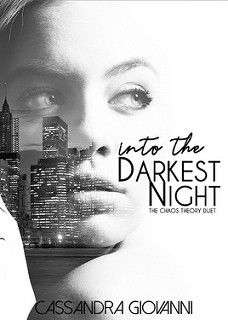 I was born a child of the Elite; destined to live a life of privilege in Sun City.

With one decision I gave it all up.

Ana Jacobs knows the Elite and their depravity all too well. She was one of them once. Her father was a member of the Inner Circle and head of the Trinity funding the corruption of Sun City. When he learned she knew the names of those he'd hidden so well, he turned his back on her; had her kidnapped and tortured to protect his secrets.

When she escapes the island and learns of her father’s death at the hands of a knife-wielding vigilante called the Nightwatchman, she returns to Sun City, vowing to use her knowledge to protect the city. As a city cop, she blends into the background, and no one suspects her real motives.

Levi Bennett knows where Ana’s been. He's also an Elite, but where Ana was sent to the island, he ended up there by accident. While Ana buries herself in her work and stopping the flow of illegal drugs and weapons into the poverty-stricken Blue District, Levi covers his pain by partying and spending his trust fund on buying bars and restaurants.

Thrown together by Levi’s constant pressing of the limits, the two can’t deny the connection they share through their dark pasts.

Their demons are one in the same, but some demons can’t be tamed.

You can buy Into the Darkest Night here:

There’s a reward program for everyone who orders a copy of Into the Darkest Night (ebook, physical copy or library requests) before 30 September. You can fill out this form. And you’ll receive your reward for ordering and be entered to win the grand prize. 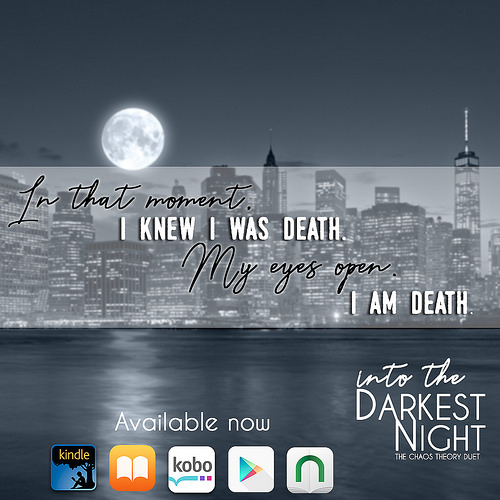 “So, you and Lily?” I ask, pointing between the two of them as the familiar burn settles into my throat. Alcohol isn’t something I’ve missed, and I watch Levi from the corner of my eyes as he shakes his head when the bartender offers more. It’s in direct violation of everything in his files. My fingers tingle, and I pull them into fists at my sides as I look back to Robbie. He nods, and his nose twitches as he signals for the bartender to fill him up. Lily tucks a loose strand behind her ear and shakes her head to the bartender. She shifts from foot to foot as she stares down at her tan and teal cowboy boots.

“Want to dance?” Robbie asks Lily, and her eyes widen with relief.

They disappear into the crowd on the dance floor, and I sit on the stool beside Levi, letting my head roll to my shoulder, so I’m looking at him. “Just happened to get too loud tonight?”

He smirks, watching the crowd sway to the music. “Check the business’ file like you did mine, and you’ll see it happens regularly. Our neighbors just aren’t that fun.”

“So, you and Robbie—how did I not know you?” Levi finally asks, changing the subject.

I raise my eyebrows at him, and his hands are in fists, the smile on his lips gone.

“It was after you went missing— but I was around before that – we’re both Elite, well, were. You were just a tad bit engrossed with Lily from what I remember,” I reply.

His eyes drift to the ceiling. “Ah, yeah—that.”

“It must’ve been awkward coming back to…” I don’t know how to put softly your best friend dating your girlfriend. I don’t understand why my throat thickens as I watch his reaction. I shouldn’t care if it bothers him.

Maybe it’s because I get how lonely coming back is. My toes curl in my shoes at the thought. Loneliness is my only friend.

Levi leans forward, pressing his muscular forearms into his knees. “Just a little bit.” His shoulders lift, and his eyes come up to mine, causing an eruption of tingles up my spine. “But they’re good for each other. I’m not who I used to be, so it’s not like it would’ve worked anyway.”

Butterflies erupt out of dormant chrysalis I never thought would be awakened as his eyes flick over my face. The calculated smugness is gone, and the man before me is part the innocent boy I had a crush on all throughout high school and part damaged man that I feel, stupidly–no doubt–that only I could ever understand.

I turn in the stool, so I’m facing the bar. “Do you have anything that doesn’t taste like Windex?”

Levi laughs as he goes behind the divider. He reaches up to the top shelf lined with expensive looking bottles, and his shirt lifts, showing one of the dimples in his back and a pale scar that travels diagonally from it. My eyes follow the line to a tattoo of a kanji—Japanese character—for a skill I’ve yet to master.

Judging by its placement on his back, he has almost as many skill marks as I do. Not only did Levi survive the same hell I did, but he’s received the same training.

Levi Bennett is a Shinobi—a ninja.

We’re something that isn’t supposed to exist in the modern age, yet here we are. I watch as he mixes me a drink, dropping a cherry in the glass before sliding it across the concrete counter to me.

“How’s paying for your father’s sins going?” he asks.

I raise an eyebrow, looking at the dark pink drink. “What’s this?”

His voice is level as he answers, “Unoriginal Sin.”

My eyes lift to his, and he leans down on his forearms, so our faces are inches apart.

“Real original, Shinobi,” I say, my voice so low only he can hear it.

He stands up and rubs his hand over his the scruff around his mouth down to his chin.

“I guess we’re more similar than I thought,” he says. His eyes flick to the television as he nods to it. “He’s trying to save the city, too. Looks like he’s doing a better job, though.”

I read the text scrolling across the screen since the volume isn’t on.

The Nightwatchman has struck again, this time taking out Adam Cleary, an international businessman. It appears Cleary was involved with sex trafficking.

My ears ring. Another name from my list and my prime suspect for the Nightwatchman is standing in front of me with his arms crossed and pulsing with irritatingly sexy muscles. 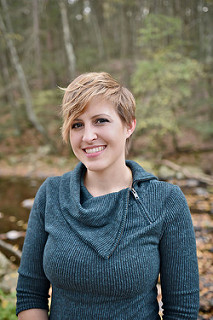 Cassandra doesn’t remember a time when she wasn’t writing. In fact, the first time she was published was when she was seven years old and won a contest to be published in an American Girl Doll novel. Since then Cassandra has written more novels than she can count and put just as many in the circular bin. Her personal goal with her writing is to show the reader the character’s stories through their dialogue and actions instead of just telling the reader what is happening. She writes romance books in various genres, including adult romance, new adult romance and teen romance. She also has several kids books. In addition to being a published author, Cassandra is a successful full-time financial marketer. When she’s not making the characters in her head come to life, she either has her bow and arrows or longboard skateboard in hand. She’s happily married to the man of her dreams and they live in the rolling hills of New England with their daughter Hope and their dogs, Bubski and Kanga.

For a chance to win, enter the rafflecopter below: