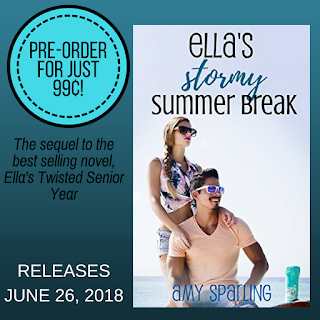 Ella's Stormy Summer Break releases on June 26th! You can pre-order the book for the exclusive pre-order price of just 99 cents! (After release day, the price goes back up to $3.99)

I’m pretty sure my bedroom has more items in it than the rest of the house combined. And that’s a little ironic because up until last weekend, my room consisted of an air mattress, a dozen outfits in the closet, and a gorgeous antique makeup vanity I got for ten bucks at a garage sale. Now, I can barely see the faded carpeting over the boxes and shopping bags of crap. I mean, it’s not crap—it’s cool stuff—but I am overflowing with guilt that it’s all been bought for me.
Mom shuffles into my room, carrying a purple fabric laundry basket that’s filled with purple towels, purple washcloths, a purple shower caddy and purple flip flops for wearing to the communal shower. I’m not a fan of the idea of showering while wearing shoes, but she’d told me more than once that dorm showers are germ factories and that my dad had once suffered a case of athlete’s foot and it was disgusting.
She sets it all on the floor in front of her and then puts her hands on her hips, appraising my room of junk with a pleased smile. “Perfect. I think that’s everything.”
“You know, just because purple is my favorite color doesn’t mean everything has to be purple,” I say, picking up a package of purple plastic utensils.
“That’s in case the cafeteria runs out of silverware,” Mom says.
I roll my eyes. But she’s trying so hard, and I can tell she’s so excited to be buying me all this unnecessary crap with money we don’t exactly have. I put on a smile because I am grateful, it’s just a little too much to take in right now.
“Thank you, Mom,” I say, standing up from my air mattress and stepping carefully around all the shopping bags to give her a hug. “I am all set for college now.”
“You are, but I’m not,” she says over my shoulder as she squeezes me tightly. These hugs have been more frequent after the tornado swept through town and took our house with it. My parents and I all got hit with the realization that we could be gone at any moment. It’s scary, being aware of your own mortality, and I’m happy for the hugs.
“My baby,” Mom says, pulling away and holding me at arm’s length. The fine wrinkles in the corners of her eyes seem a little deeper every time I see her. She’s still wearing her scrubs from her nursing shift that ended several hours ago. After Mom lost all her clothes in the tornado, she’s only replaced the scrubs. Now she wears them all the time, even if she’s not at work. She smiles at me, and I watch those eye wrinkles fold together. “My baby is all grown up. Going off to college…” She exhales and pulls me in for another hug. “I’m so proud of you.”
The moment is bittersweet. I’m definitely happy that I’m going to college, especially after we lost everything we had and I didn’t know if it would be affordable or not. Then I applied to my dream school, the Hilltop School of Culinary Arts, and my essay on what it was like to survive a tornado but lose everything won me a full scholarship. Room and board and everything. I about died when I opened the letter. I am so unbelievably thrilled to go to my dream school and learn the skills I’ll need to open my own cupcake shop one day, but all that excitement comes with just as much worry.
The college is three hours away in a small town south of Dallas, and that’s three long hours away from my home. We finally moved out of the Poe’s house and into our own rental home, but my parents are more stressed than ever now. While we used to own our old house, this one is just being rented. On a nurse and paramedic’s salary, they can’t afford to pay rent and also save up to buy our own new house someday. The land from where our old house was is still for sale, but no one has bought it yet. Apparently people don’t care to build a new house on a street with houses that were all built twenty years ago. When it does sell, my parents might have enough for the down payment on a new house, but until then, we’re just stuck in this tiny, old, dingy, overpriced rental.
We have filled the house with some furniture, just not much. The living room is the most put together, with a used couch and a new TV and a gorgeous rug Mom and I found on clearance on Overstock.com. My parents got a bed for their room for cheap from a friend, but I insisted that the air mattress was fine for me. I don’t want them spending any unnecessary money on me, especially since I’m going to college soon. My frugal ways only lasted a few months, because now that I have a free dorm room, my mom has gone a little crazy buying me stuff to fill it with. But I know it makes her happy, so I’m trying to be grateful and not annoyed.
Mom helps me take all the dorm stuff out of the boxes and shrink wrap and we pack it tightly into plastic containers, consolidating it as much as possible for the trip to my dorm. I start college in just nine days. This is officially the last week of my summer as a carefree teenager. Soon I’ll be a college student, and then, hopefully, an adult with her own cupcake shop.
It’s bittersweet thinking about these last few days of freedom before class starts. I’ve had eighteen years of living with my parents, going to public school and hanging out with friends at home. Now it’s all about to change.

I’m half asleep in my bed, half watching a Netflix marathon when my phone rings. The sound is so loud it makes me jump, and I knock the phone to the floor. Blinking my eyes, I sit up and retrieve the phone, which now has Ella’s beautiful face on it. I answer her call.
“Hey, beautiful.”
“Ethan,” she says. She sounds weird. Maybe she’s tired. “Can you come over? Like, right now?”
I check the time, and it’s just after eleven. “You asking for a booty call?” I say playfully.
She sighs.
Okay … clearly this isn’t a time for jokes. I clear my throat. “Yeah babe, I’ll be right over.”
A funny thing happened when I turned eighteen and graduated high school. My parents got really chill. I guess because I’m a legal adult now, they just stopped putting rules on me. My dad said it’s also because I’m a good kid, so he doesn’t worry. I know I can leave the house right now without asking permission, but it still feels weird. I guess I haven’t been an adult very long.
Dakota is still awake in her room, so I tell her I’m headed to Ella’s.
“Gross,” she says. “I don’t need to know about your sex life.”
I leave before she says anything else. As far as I’m concerned, my fourteen year old sister doesn’t need to know a damn thing about my sex life. Hell, I wish she didn’t even know what the word sex even meant.
My chest is tight with anxiety as I make the twenty minute drive to Ella’s house. She sounded off, and although we have a great relationship, I keep getting these awful thoughts like maybe she’s about to break up with me. Maybe she’s met someone else. Maybe she thinks I’m just holding her back since she’s about to go off to college. By the time I pull into her driveway, I’ve worried myself into a panic.
I get out of my truck and close the door quietly and then make my way toward the front of the house. I start to send her a text to see if she wants me to knock or wait for her since her parents are probably sleeping.
“Hey.”
I jump. Ella is standing right here, in the darkness, waiting on me. “Shit,” I breathe. “I didn’t see you there.”
She grins. That’s good, right? It means this isn’t a break up visit. “Sorry, I wanted some fresh air so I came out here to wait for you.”
I want to kiss her but I’m still scared as to what this meeting is about. “What’s going on?” I ask.
She throws her arms around me and buries her face in my chest. “My mother.”
I breathe a sigh of relief. “What happened?”
She looks up at me and shakes her head, like she can’t believe whatever she’s about to say.
“My freaking mother … UGH!”
“Babe?” I say, leaning down to kiss her cheek. “What is it?”
“So there’s that stupid hurricane that’s hitting New Orleans,” she says. I nod for her to continue. “Mom just volunteered to go work at their hospitals over there. I guess they’re expecting a lot of hurt people or whatever, so they asked for nurse volunteers. And my mom signed up!”
“Wow,” I say. I’m having trouble understanding since my mind is still so relieved that this isn’t a break up meeting. Ella still loves me. Things are good. But this isn’t about me right now, it’s about her. “When does your mom leave?”
“Tomorrow,” she says, tossing her hands in the air. “And Dad is going with her too. Can you believe this shit? They didn’t learn their lesson from that tornado? They just want to rush out into harm’s way to help people?”
I take both of her hands in mine. “Well, babe, I think it’s kind of nice of them. Hospitals are built to withstand hurricanes, so they’ll be okay if they’re inside.”
She huffs, her nostrils flaring. “I mean, I know. I know you’re right, but … I’m just mad. I don’t want them to leave.”
“It’ll be okay,” I say, squeezing her hands. “They’re doing a good thing. And you’ll be staying here, right?”
“Hell yes I am,” she says. “I want nothing to do with any natural disasters.”
I smile and tilt her chin up, kissing her softly. “You could probably come stay at my house while they’re gone,” I offer.
She gives me the first real smile I’ve seen on her in days. “Or you could stay here.”
I slide my hands around her waist and pull her tightly to me. I cannot describe how good it feels to know that everything is okay with us. “Even better.”