Plans for 2017 & Announcing The Immortal Mark

This year was a fantastic year for my writing career. It was my second year as a full time writer, and I learned so much about being self employed and writing. I've also been unbelievably blessed to have such amazing readers who send me the best emails!

This year I published 9 full length novels and 3 novellas! It was my most  productive year ever since I started writing seriously in 2008.

For 2017, I plan on publishing one novel a month, starting with my new series, The Immortal Mark. Up until now, I've always published YA contemporary romance, but I've been aching to write this series ever since the idea came to me a few months ago. I recently took a survey of my readers and 94% of them said they'd be happy to read a paranormal series by me, so that motivated me to get started on it. I do still plan on releasing a YA contemporary romance every now and then to keep all my readers happy. :)

The Immortal Mark an urban romance with paranormal elements, and the main character is 18 years old, so it falls somewhere between upper Young adult and New Adult on the genre lists. There will still be LOTS of romance, so no worries! I am super excited for this series and I have already fallen in love with my characters. I really hope you'll enjoy it, too!

See below for the official summary and the cover, which I am ridiculously in love with because look how gorgeous!! 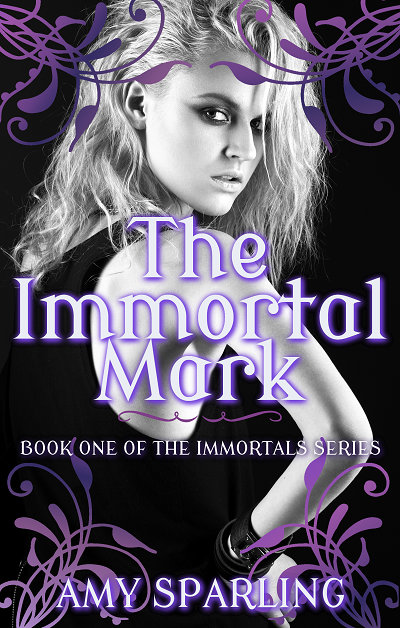 The only thing Cara got for her eighteenth birthday was an unexpected invitation to move out of her uncle’s house. College isn’t an option for a poor girl with average grades, so when her best friend Riley finds them a mysterious job opportunity that includes room and board, Cara is interested but thinks it sounds too good to be true.
The night before their interview, Cara has an epic night out with Theo, an impossibly handsome guy she just met. He’s charismatic, a little mysterious, and it feels like she’s known him her whole life.
When she runs into him at her interview, he’s cold and elusive. He makes it very clear that he doesn’t want her working with him, which only makes their mutual attraction burn hotter. Cara takes the job for Riley’s sake and promises herself she’ll avoid this jerk and his mood swings, no matter how hard it is to keep away from him.
Soon she finds out her millionaire employers aren’t normal guys who live and travel in luxury. They’re immortals. Theo wasn’t trying to ruin her job prospects. He was trying to save her life, because the girls they hire never make it out alive.