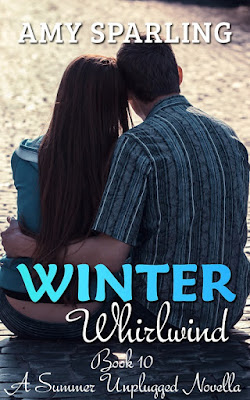 Today is a bittersweet post. But it's mostly sweet! Here's the cover for the tenth and final Summer Unplugged book. Yep. This epic series is finally coming to an end. I started writing the first book back in 2012 and it was a fun project that I wrote for me, and I had no intention of it ever going anywhere. And then the readers fell in love with Jace and Bayleigh and begged for more, and well, you know the rest of the story.

Winter Whirlwind will be published around March 1st. (Maybe sooner) And that will be the conclusion to Jace and Bayleigh's story. But don't fret! I have exciting news....

In April, I'm releasing a brand new spin-off series, set 15 years into the future. Want to know what happens to Jett, as he grows up in the shadow of his father's motocross legacy? Because this series is his! We'll see what happened to The Track, if Jace and Bayleigh are still together, and we'll learn which personality trains Jett has picked up from his parents, all while he navigates dealing with his first crush.

Be sure to sign up for my mailing lisst (there's a link to the right >>) to be the first to know when the new series is released!

And thank you all so much for being such wonderful fans of the series! I love you all!