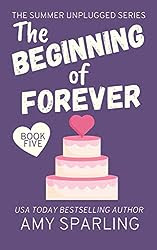 The very last book in the Summer Unplugged series comes out in 13 days! PLUS! Unlike the SU novellas, this book is more than twice as long as the novellas. So double YAY!

Because I've had some awesome readers tell me they can't wait until the 15th, I thought I'd share a little teaser from Chapter 1.

So sit back and enjoy!

The Beginning of Forever
Chapter 1


There are few things more terrifying than thinking you might be pregnant at the age of eighteen. One of the things that makes that more terrifying list? The two minutes after you pee on a stick and watch it turn pink. My stomach crawled into my throat and I had to blink my eyes several times so I could see. Only my hands were so shaky I couldn’t focus on the stupid pee stick. It was pink. Faintly and then all at once it was very dark. Pink in three places.
Of course I knew what three pink lines meant. I had read the package a dozen times before I even opened it and yet, I still had to check it again. I set the stick on the counter, briefly reminding myself to clean off the pee drips later, and grabbed the box to read the instructions again.
Yep. It still said the same thing. Three lines - pregnant.
Maybe this one is defective.
“Babe? The suspense is killing me.” There was a tap on the other side of the bathroom door and then a thud of what sounded like Jace’s forehead resting against it.
“Just a second,” I called back. My voice didn’t even sound like me. It felt like me, the real me, was somewhere far away watching the other me, the Bayleigh who is sitting on the toilet, yoga pants around her ankles, and thinking, “Wow, I’m glad I’m not her.”
Only I am her. And this is my life now.
Oh my God. Oh. My. God.
Mom is gonna kill me.
Mom. I’m going to be a mom.
I try to swallow and I almost choke on my own spit. My vision blurs and I rush to stand and tug up my pants and smooth out my shirt and try to look normal. I wash my hands and toss the box into the trash can. The mirror above the sink shows a girl who is too pale, too scared, too...unprepared.
“You alive in there?” He’s trying to sound all light hearted. I know he’s freaking out just as badly as I am, but he won’t show it. He never loses his cool around me.
“Yeah,” I call back, staring at the door and trying to picture what he looks like on the other side of it. “I’m alive.”
“Everything okay?” Those two words were a secret code. An encrypted message that actually meant so much more than just is everything okay. It meant, am I about to be a father?
My reply was just as cryptic.