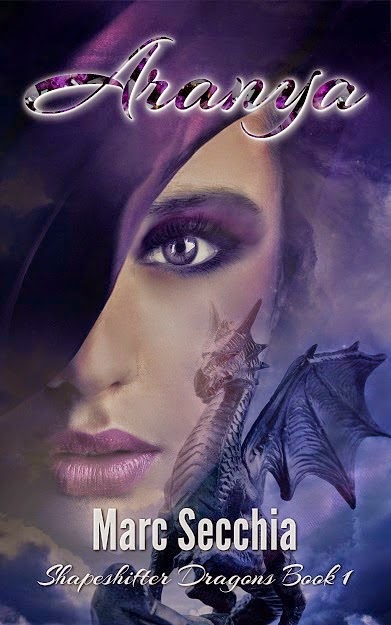 , I've been dying to get my hands on more YA dragon fiction. Today's featured book looks like a winner! Aranya is book 1 of the Shapeshifter Dragons series by Marc Secchia. It was released just a month ago and is already a best seller! Make sure you check out the excerpt at the end of this post.

Check out the blurb below:

Chained to a rock and tossed off a cliff by her boyfriend, Aranya is executed for high treason against the Sylakian Empire. Falling a league into the deadly Cloudlands is not a fate she ever envisaged. But what if she did not die? What if she could spread her wings and fly? Long ago, Dragons ruled the Island-World above the Cloudlands. But their Human slaves cast off the chains of Dragonish tyranny. Humans spread across the Islands in their flying Dragonships, colonising, building and warring. Now, the all-conquering Sylakians have defeated the last bastion of freedom–the Island-Kingdom of Immadia. Evil has a new enemy. Aranya, Princess of Immadia. Dragon Shapeshifter.Quotable quote: "Still lay the Island-Wold beneath the whisper of a Dragon's wings"

Marc is a South African-born author who lives and works in Ethiopia with his wife and 4 children, 2 dogs, a rabbit, and a variable number of marabou storks that roost on the acacia trees out back. On a good night there are also hyenas patrolling the back fence. When he's not writing about Africa Marc can be found travelling to remote locations. He thinks there's nothing better than standing on a mountaintop wondering what lies over the next horizon.

Nak scowled at the Dragon, who glowered in return. “I’m trying, Nak.”
“Trying with the wrong brain,” said Nak. “Try to appreciate, my delectable damsel, how much more brain there is behind that thick Dragon skull of yours than a Human will ever enjoy. Islands’ sakes, your head and muzzle are longer than I am tall. A Dragon’s brain is designed for flying.”
“I understand that, Nak.”
“But does it penetrate that impervious shield of armoured Dragon bone about your cranium?” Nak smacked her muzzle for emphasis. “The instant Human-Aranya tries to fly, you resemble a blue-speckled marsh stork stuck in a glue trap, flapping up and down in a panic. Dragons glide, Aranya. They soar. They do not flap straight up and down like a child playing Dragonships, they tilt the wing to minimise drag on the forward stroke and maximise power and lift on the backward stroke. A figure of eight is basic to good flying.”
He demonstrated with his arms–for the tenth time, Aranya thought, crossly. The real problem lay between her ears, precisely as he said, in her inability to disassociate her Human brain from the business of flying. Don’t think. Just fly. Easy as breathing.
She followed his instructions yet again, showing the maximum extent of her incredibly flexible wing joints. She made her wing tips touch together ahead of her nose, then way above her back, before spreading her wings to their maximum extent, her struts straining and her muscles quivering as she held the required position.
Nak marched along her wing, tapping the salient points with his cane. “First joint, the shoulder. The second–your elbow, if you prefer–brings the wing bone forward again, although you can reverse it and lock the joint for the gliding configurations. Eleven flight struts, your primary struts, lie between the shoulder and the elbow. They are a light and flexible form of Dragon bone. Seven struts lie between the elbow and the third joint, your wrist. These provide power when used properly. All of your struts can curve with these ancillary muscles to provide additional shape to the wing’s surface. From the wrist to the wingtip we have five thinner struts. These provide manoeuvrability and fine control in the air. Now, the tail–”
“Nak. You’re filling her brain with technicalities,” said Oyda. “The poor girl’s mired worse than your stork in a glue trap.”
“Ha!” snorted Nak, resting on a boulder. He waved his cane. “Your pupil, master.”
Aranya glanced between them. They were so familiar with Dragons. So experienced. Nothing about Dragon-Aranya seemed to surprise Nak and Oyda. It was hard to believe that the rest of the Island-World did not feel the same way.
Advancing toward her with a posy of wildflowers held in her right hand, which she had been collecting, Oyda said, “I’ve been thinking.”
“Thinking is precisely the problem around here,” Nak interrupted.
Oyda quelled him with a fierce scowl of her own. “Right, my fledgling. Memorise these flowers.”
“I–um, what’s this got to do with–”
“Now, or it’s none of my honey biscuits for you later, you churlish wretch.”
Aranya studied the wildflowers. Five meadow daisies, a sprinkling of tiny blue-tinkles and three each of peonies, red anemones and tall bursts of fireflowers, made up her posy.
“Now, you will make a pass above the dell,” Oyda instructed. “While you fly, you will tell your Human brain to paint these flowers in every detail. I will question you afterward. And–do shut your yawning trap, petal. You’re catching flies.”
Grumbling to herself about how direct Nak and Oyda could be at times, Aranya thumped four-pawed over to the edge of the cliff, to her favourite outcropping, and threw herself into the air. This bit at least she had grasped. As usual, the moment she was aloft, her Human and Dragon brains went to war in her head. She immediately wallowed in the air. Every wing beat was a struggle.
Fine. She would paint flowers.
Aranya shot through the morning air. The deep golden sunbeams of a partial eclipse, the twin suns almost completely hidden behind Iridith’s bulk, seemed thick enough to swim in. She wheeled a thousand feet out and spun back on her wingtip for the required pass over the dell, where the figures of two tiny old people watched her intently.
She shaped meadow daisies. She concentrated on the finely bearded leaves of the fireflowers.
And she flew like a Dragon.
She raced across the sword-grass of the dell, almost brushing the blade-tips with her wingtips, before corkscrewing up above the forest bordering the heights and doubling back for a graceful landing that barely disturbed the still morning air.
Nak and Oyda smiled mysteriously at Aranya.
“Well? How was that?”
Nak wiped his eye. “Got a gnat stuck …”
“You old charlatan.” Oyda clipped the back of his head fondly. “That was Dragon, Aranya. Pure Dragon.”